The pastoral cane
of amber and silver
for cardinal
Tarcisio Bertone

The pastoral cane of amber and silver designed by well known artist Mariusz Darapikowski was given on Saturday to the secretary of state of the Holy See, cardinal Tarcisio Bartone. The archbishop, Tadeusz Gacłowski has presented him with this pastoral cane at the beginning a solemn mass close to a monument of Jan Paul II on Zaspa. (p. 6)

The Fifth Avenue in colour
of raspberries and yellow plum

In the colour supplement “The Fifth Avenue” on the newspaper Rzeczpospolita, just second time we had possibility to see jewellery of polish goldsmiths. The session “Fruits of fiction land” prepared Ewa Wejnert with a help of Joanna Macur. Inventive of this project, a chief of the column of fashion, Lidia Polpiel, photographed a model, Ewelina Horosz, in jewellery of companies: Lewantowicz, 3 Treasures, Joanna I Elżbieta Macur. Nacklaces, bracelets, and rings splendidly suit gowns of Ewa Minge and Michał Starosta. We are impressed by effects and we are waiting for a next show. (p. 8)

Center of innovation in Birmingham “Silver schools” in Legnica

18th May in one of rooms in The Center of Culture in Legnica was opened an exhibition “Silver schools”. In this year were presented works of professors and students of UCE Birmimgham Institute of Art and Design School of Jewellery from Birmingham and Konstfack University College of Arts, Crafts and Design from Stockholm. (p. 26)

He is called by same people master of polish goldsmithery. He is famous owing his perfect work and excellent proportions and feeling for aesthetic art. His adventure with yewellery he started from simple forms during a secondary school. His first works were made form silver, until at the beginning “90 years of XX century he started using gold, platinum and stones, he likes the best. He found a lack of the polish market, clients are still searching for rarities made from expensive materials and stones. This process is reflecting in his work by 30 last years – he had right. Today he is counting among the famous and the more known polish artist – jewellers. (p. 27)

Fascinations of Nature
of Ewa Rudowska

Creation is the biggest passion of Ewa Rudowska. Several years ago she left an employment as photographic and she changed own status for an uncertain creator of jewellery. It was such different than a few people gave her chance to reach a success. Now she owing own jewellery can recover. (p. 28)

In Poland and Slovakia is keeping a good demand for jewellery, worst situation is in Czech Republic and Hungary, were we can observe economical crisis in this sector-such result gave 21st meeting of directors of Assay Offices from all countries of The Wyszegrad Group, which were during 23-24th May in Krumlow. (p )

Cycle of cameral amber exhibitions from Amber Collection of Warsaw of The Earth Museum PAN in Warsaw is presented during fair GOLD, SILVER, TIME as additional event called “Museums on fair”. In 2002 year we was projected long-term program presentation of all interesting problems according to actual knowledge about amber as polish raw material with special decorative valor. (p. 34)

“The Six” in Gallery Bielak

Every day each of them can realize own plan an ideas, they exhibit and take a part in concurs separately – together they received a lot of awards and individual exhibitions, and more than hundred collective, they are really good and active artists. 11 June p. a. “The Six” was all in Kraków: Bogumił Bytomski, Krzysztof Roszkiewicz, Paweł Kaczyński, Marcin Tymiński nad Arkadiusz Wolski. (p. 37)

Not only polish amber
in Las Vegas

JCK is one of the most important fair at the world, but still is lak of a good promotion of polish amber – mentioned Mariusz Gliwiński, owner company Ambermoda, who is selling own products for American market a lot of years. (p. 18)

The amber pen for Lech Wałęsa

Bogdan Oleszek, a chairman of The City Council of Gdańsk will present Lech Wałęsa with the pen from amber and silver by Ambrex. This honourable mention was granted by Paweł Adamowicz, a president of Gdańsk for promotion of city, famous as a cradle of “Saolidarnosć” and world capital of amber. (p. 4) 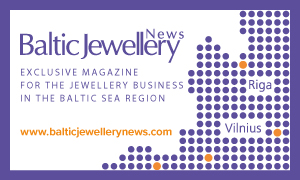